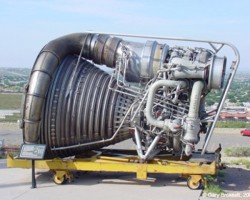 NASA and Shape Fidelity work together to construct a complete and accurate digital assembly of the legendary engine from the Saturn V.

For a more thorough account of this project, we refer you to the published article, "How NASA brought the monstrous F-1 “moon rocket” engine back to life" by Lee Hutchinson on Ars Technica.

The massive, liquid-fueled F1 engines launched the Apollo missions on their way to the moon almost 50 years ago - designed and constructed well before the use of 3D CAD.  To capture the design decisions of the past and share them with future generations of engine development, NASA needed to create a complete digital model of the F1.  To accomplish this, they turned to Shape Fidelity.

The project required that the entire engine assembly and its constituent parts be scanned and modeled. Shape Fidelity coupled high-resolution 3D scanning with photogrammetry to create a digital assembly of the entire engine.

The complete assembly was scanned and the positions of small optical targets placed on each part were captured with a photogrammetry system, creating a constellation of points representing the precise, as-assembled positions of each part.  Each part was then removed and scanned individually, and the same photogrammetry targets were integrated with each scan.   These targets enabled each individual part to then be re-assembled to its proper position in the digital assembly.